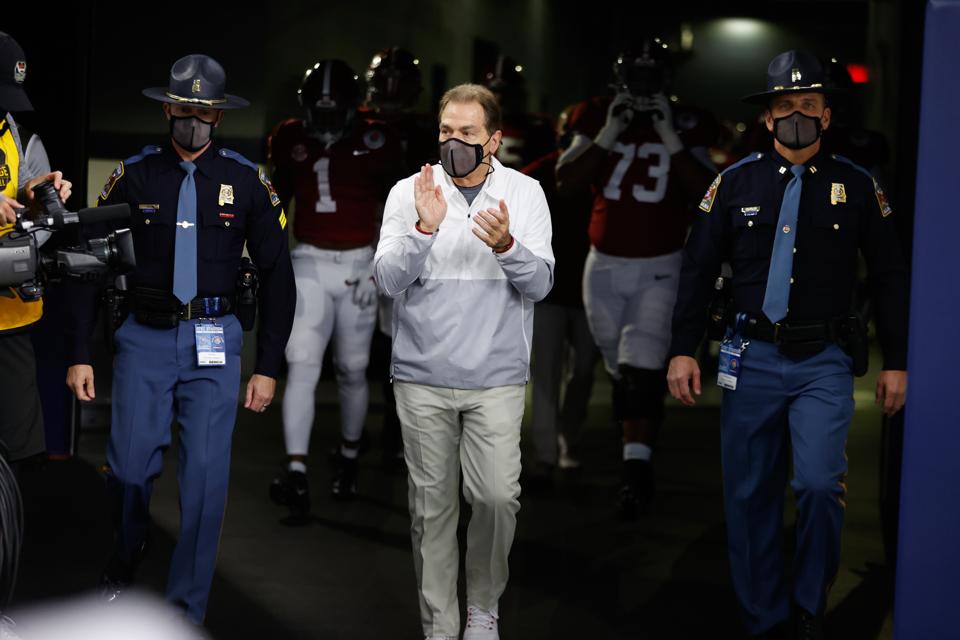 Let’s consider the sacrilegious, though.

If Ohio State forgets it’s an underdog by more than a touchdown and wins, here’s the solution for those of us who believe in truth, justice and everybody playing nearly the same number of games in a season: Give the Buckeyes that 24-karat gold trophy—27 inches high and 35 pounds—during the victory celebration. After that, place an asterisk on top.

With flashing lights or something.

Under that scenario, when historians research the 2020 college football season, they’ll see the asterisk, and they’ll realize Ohio State had no business facing Alabama on January 11, 2021.

They’ll realize the Buckeyes shouldn’t even have made the Final Four of college football before reaching the Final Two and becoming the Final One.

They’ll realize Ohio State entered the Playoff having played barely half as many games as fellow CFP participants Alabama, Clemson and Notre Dame.

“I think the games matter,” Clemson coach Dabo Swinney told reporters after he did the right thing in the coaches’ poll at the end of the regular season by treating Ohio State with little (okay, no) respect.

Swinney voted Ohio State 11th overall, and he didn’t back down, saying: “The mental and physical toll of a season, there’s nobody out there that would say that somebody who’s played 11 games versus somebody who’s played six is better physically or something like that because it’s a long season.

“We’re going on Week 21. These guys have had no break. It’s been a grind, not just football-wise, but the mental challenge and the personal sacrifice and commitment that everybody’s had to make to be able to play and continue to play. It’s been incredible.”

Courtesy of the coronavirus, Ohio State and its Big Ten brethren didn’t start blocking and tackling until weeks after the SEC (Alabama) and the ACC (Clemson and Notre Dame), but the pollsters shrugged.

In both the AP and coaches’ polls, Clemson was No. 1 back then at 5-0, including a victory over No. 11 Miami. Alabama (4-0) became the consensus No. 2 team in the country after clobbering No. 4 Georgia and manhandling No. 7 Texas A&M.

Georgia’s only loss in four games was on the road at Alabama, which is why both the Associated Press and the coaches placed the Bulldogs at No. 4.

Then you had Ohio State behind Georgia.

As for the honorable thing to do, well, um ... the Buckeyes could have thanked everybody for thinking so highly of their potential over their performance, and they could have opted to leave the CFP picture.

You may laugh now.

Even though Forbes said in 2019 that Ohio State ranked fifth in the country in average revenue over the previous three years at $134 million, those running the program didn’t ignore the chance this season to grab the extra $6 million each team gets for making the CFP.

Even so, Notre Dame (which finishes the season 10-2) entered the CFP ranked behind Ohio State, and Clemson (which ends up 10-2) sat slightly ahead of the Buckeyes at No. 2.